Today, cost containment comes in many forms. In the ongoing debate about “reference based pricing” (RPB), it turns out RBP has evolved and diversified into specialized cost containment tools that have overcome some of the industry’s early barriers to success. For example, many health plans are using cost containment only in highest claims cost cohorts and working with partners who provide among other things, balance billing education, advocacy, and support for members. If this comes as a surprise, you are not alone. Recently, Renalogic sponsored research to identify how many brokers and consultants are aware of cost containment strategies, their likelihood to recommend cost containment today, and in the years ahead.

The focus of our research was the latter which occurs when vendors partner with employers to reprice claims, oftentimes without any provider agreement in place. While this approach has been very successful in controlling costs in many instances, it also has the potential if mismanaged to open the door to balancing billing friction for the employer and employee when a provider doesn’t accept the repricing.

However, the effectiveness of RBP against runaway medical costs has matured in its appeal in recent years despite the tradeoffs. On average, vendor convened RBP plans can offer immediate savings, costing plans about 20 percent less than traditional health plans (Source: Beneﬁts Pro). That’s compelling.

Today, RBP is still limited to a small fraction of employers, but the mechanism has gained positive traction.   As more and more economic pressure has mounted on self-funded health plans, examples in the market have occurred on how to combat the complexity, and possible employee friction, allowing RBP adoption to grow at a steady, if not exponential, rate.

“With survey respondents expecting 4-7x growth in the utilization of RBP by their clients over the next three years, it will be important to watch closely how RBP programs recalibrate the buying of beneﬁts over the next multi-year period.”

So where do brokers plan to recommend cost containment going forward? Traction is growing particularly for high-cost patient management with specific diseases. The survey clearly suggests that dialysis may be a speciﬁc situation where RBP can be adopted aggressively.  Because dialysis is a relatively low incidence, high-cost situation, employee abrasion fears are largely mitigated, if not wholly eliminated.  It is much easier for an employer and vendor to support, work with and explain RBP to just a few dialysis patients on a health plan, than 40-50 percent of members that might use a hospital-based service that is impacted by a general reference-based pricing plan. 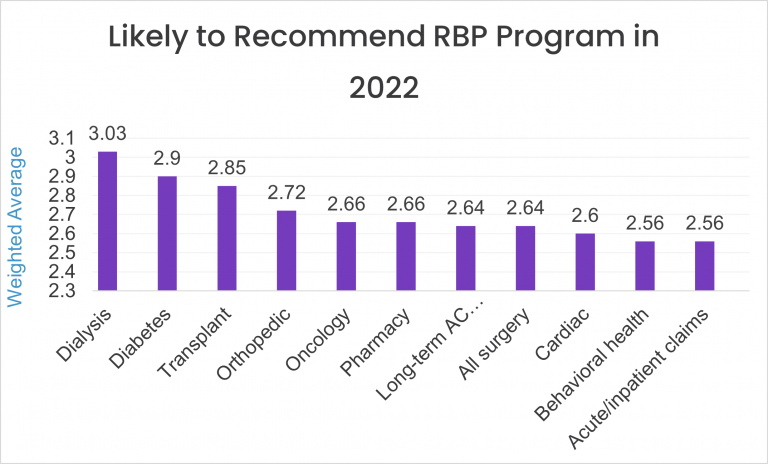 The survey asked how likely brokers are to recommend a RBP program to manage costs for specific costs, as shown above.

Survey respondents are most likely to manage risk associated with catastrophic claims costs to help protect plans and their members.

Overall, our research points to RBP being a tool that will be increasingly utilized as the health care system shifts from fee-for-service to value. RBP is a catalyst for employer value-based care innovations and the strategy’s intrinsic transparency and accountability positions it well to assist in containing costs, speciﬁcally for dialysis, over the next several year period.

Want to learn more about what industry peers are thinking about cost containment today and in the future? Get the full Broker Report here.

Renalogic is a purpose-driven business dedicated to reducing the human and financial costs of chronic kidney disease (CKD) and other illnesses for employer-based and other self-funded health plans. Founded in 2002, Renalogic combines NCQA-accredited Population Health Management clinical and cost-containment services to deliver guaranteed impact every day by improving health outcomes and reducing costs. The Renalogic Suite of products, ImpactIQ, ImpactCare, ImpactAdvocate and ImpactProtect, provides benefit brokers and consultants, third-party administrators, captive managers, and stop-loss carriers the most comprehensive CKD risk management methodology to reduce their client’s costs and improve member health proactively. With a clinical track record of preventing 99 percent of members with CKD from progressing to dialysis and cumulative client savings of more than $750 million, Renalogic is the recognized leader in helping employers and self-funded health plans fight CKD.

Back to Industry Trends & Insights